Changing of the Guard

Well it's been a week since we arrived.  Oddly, it seems like we've been here much longer; as if it's where we belong!  Three couples have departed;  a new couple has arrived, and another is due in today.  Over the years we have met so many of Fred and Kat's special friends and are always delighted to find we will be overlapping with them, although it's always fun to meet new people.

This is such a unique experience and one reason is that we have the privilege of being here for a whole month, so we see the coming and going of a variety of people.  Each departure and arrival changes the tone, the energy, and the discussion.  It's sort of like signing up for four weeks at Chautauqua and getting four different experiences.

We had a very interesting discussion the other night.  Fred proffered that the two fields where we are seeing the most important advances are Physics and Astronomy.  As proof he said, "the number of electrons that can go through the head of a pin in a second is the same number of drops of water that go over Niagra Falls in one hundred years, and it takes 8 minutes for light to reach the Earth from the Sun;  it takes 100,000 years for light to reach the Earth from the farthest star in the Milky Way (of which the Earth is a part.)"

The discussion continued as we realized that electrons are much large than nanotrons and whether we have any understanding of physics, we certainly know that electrons are ubiquitous in our lives.  I like sharing my computer story of when, right after college, I went to work for Pan American Airlines in the Pan Am building in NYC.  Pan Am had just acquired their  Panamac computer which took up the entire 47th floor of the PaAm building.  We used to go up to see it- hermetically sealed in a room with airconditioning to prevent it from overheating;  enormous reels turning.  I was told not too long ago that my iPhone has more computing power than that computer, taking up the entire  47th floor had in 1967!!

All we could do was marvel and wonder what kind of a world it will be in the not so distant future. Fridays are Natalia's days off, so that's when we take Fred and Kat out for lunch and dinner.  Last Friday we went to my two favorite places.  We had lunch at Las Mananitas which I have featured in many of my previous Mexican blogs.  It's where the albino peacocks roam freely and the parrots talk vociferously.  It's also where we imbibe margaritas before lunch which really takes its toll for the rest of the day! 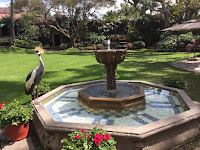 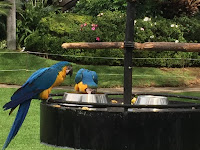 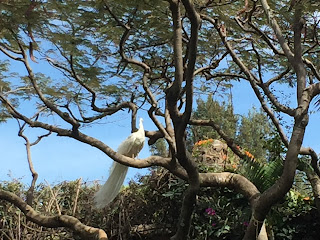 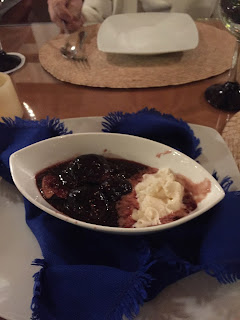 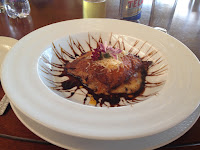 Then for dinner, we go to Gustos.  It's a delightful small hotel not far from our house with an excellent restaurant and an amazing staff.  Fred and Kat really like this place so I am hoping that we will go back every Friday before we leave as there are so many things I want to try on their menu.  Last Friday I had a delicious corn soup that came in a hollowed out gourd.  Then for my main course, I had salmon that had a guava sauce and it was delicious.  In addition to being scrumptious, the food is also presented in such a beautiful way.  The Caesar salad is made at the tableside as well as many other dishes.  The favorite dessert is figs prepared in a delicious sauce that is flambeed at the table and served with a dollop of cheese ice-cream.  Yum!


And you might be interested in the exchange rate.  I think it is the highest that I remember:  about 20 pesos to the dollar.  There were ten of us for dinner at Gustos- a really beautiful, classy restaurant.  We had margaritas and drinks before dinner.  Many had appetizers and everyone had a delicious main course.  Most had wine with their meal and there were several shared desserts.  Just think about that and ponder what a meal like that would cost you in the states.  The bill for an exquisite dinner for TEN people came to 5000 pesos - equal to a bit more than $25.00 a person!!

I also went to buy some shampoo and creme rinse at Woolworths and the bill for both bottles was 64 pesos.  That's about $3.50!!  For both!!

I was a Trump junkie before arriving here in Cuernavaca, but I have been amazed at how easy it has been to wean myself from my daily dose.  We briefly discuss the Yahoo and AOL headlines that we see on our computers such as the First woman to do a triple axel at the Olympics, or Netanyahu's possible indictment.  But the discussion rarely goes further than an acknowledgment as we have no talking heads or panels of professionals feeding our habits.  We were a bit more curious about the Obama's Official portraits, and Fred has sent us all David Brook's editorial about "The End of the Two-Party System" which we all plan to read and discuss tomorrow night at margarita time.  But I highly recommend, as an experiment,  turning off all your news feeds for a day or so.  I think you'll find you haven't missed much of anything and your life just might be more interesting!

A real luxury of Cuernavaca is the ability to read without interruption.  As I mentioned before, there is a table where people place books thaey have brought and they are up for grabs to anyone who might be interested.  Here,  I have discovered Donna Leon.  I had heard about her from many friends, so I picked up her 10th book, A Sea of Troubles and have delighted in her writing, thoroughly enjoyed her descriptions of Venice,  and found a new friend in Brunetti, her charming and cunning detective.  Not sure what book I will pick up next!

Well I think I'll send this on for now.  Stay tuned as I sense there are some very interesting discussions coming up.

Posted by nanwebware at 4:00 PM