The Zoo and The Circus All in One Day!! 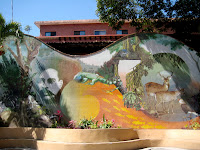 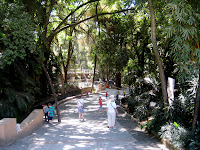 The Cuernavaca Zoo is quite a lovely place.  There are not a lot of animals, but the grounds are very pretty, with a long rambling  walkway through some beautiful vegetation. 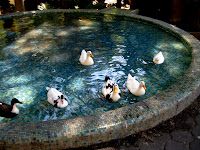 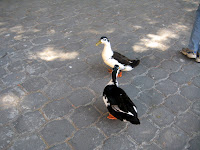 We were greeted by a family of ducks.


Walking down the pathway, we came upon a beautiful waterfall which provided a lovely photo-op for the Hickman family. 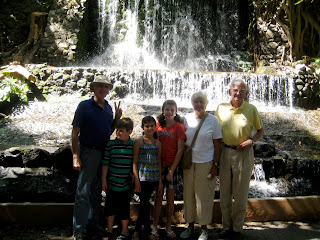 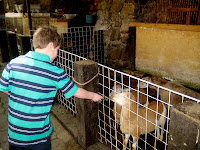 For sure, the highlight of the morning was the Petting Zoo.  Sara bought us five bundles of watercress which was quickly gobbled up by all sorts of hungry beasts.  We were first met by a cow with a very long tongue, followed by a somewhat nasty donkey who had not been taught his manners and wanted to grab bunches of cress from our hands.  But we were on to him and passed his stall quickly.  Next was a family of goats.  Mom and Dad goat were very greedy and hungry.  They wanted all the greens and would try to grab bunches from our hands.  They would also grab any away from their kids.  But Ben found a secret way to distract Mom and Dad goat and get the leaves to the babies.  He gave Mom and Dad two small sprigs and while they were eating, he fed the kids lots more. 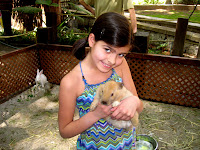 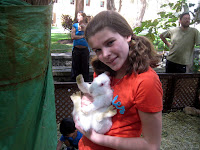 But by far, everybody's favorite part was the bunny pen.  There were adorable little bunnies just waiting to be picked up, petted and fed.  Annie is a "bunny freak" and went a little crazy in the bunny pen.  If she could have found a way, she would have brought a bunny home with her.


It was a great morning, but we still had a big treat in store for us.

After lunch, Memo picked us up in a huge SUV.  There were eleven of us all together:  Granma, Granpa, Uncle Loren, Aunt Nancy, Sara, Annie, Emily, Ben, Lily and her brother Axel who were the children of the caretakers, and, of course, our driver, Memo.  We piled in and were off to the oldest Circus in Mexico! 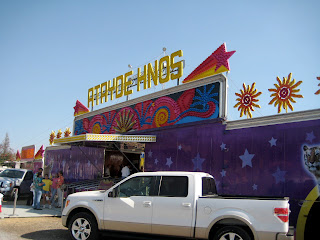 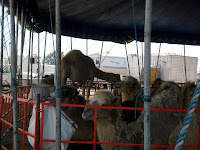 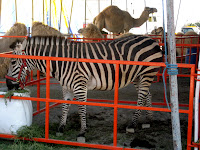 When we first arrived, there were animals in outdoor pens all around. 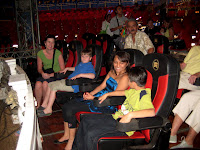 We had fantastic seats with the circus stage right in front of us. 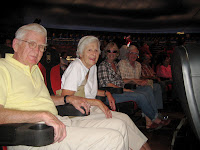 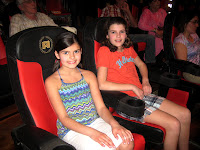 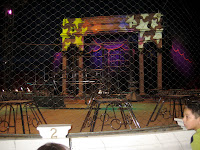 There was a big net all around, and we found out the reason when fifteen magnificent tigers entered the arena.  They were literally right in front of us with only a flimsy net between us.


I managed to get one picture, before I was informed that photos under the tent were forbidden. 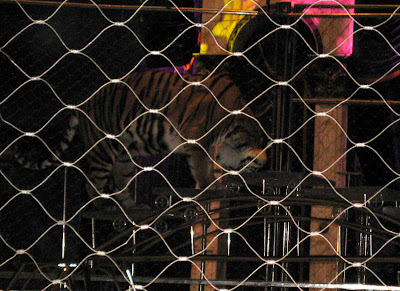 The Circus acts were fabulous, and even though it was all in Spanish, we were totally rapt.  The tigers opened the show and were amazing, jumping over each other and through hoops of fire.  There were two-humped camels who ran around in a kind of dance routine with zebras; there were trained seals, one-humped camels who performed with horses; giraffes who ate crackers from the mouths of small children who volunteered from the audience.  The human performers were quite energetic.  There were jugglers, a contortionist, very funny clowns, two amazing Ninja guys, and don't forget the dancing "Vegas" girls! 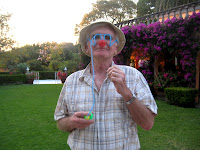 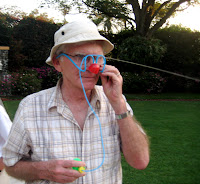 Ben used his allowance money to buy a set of glasses and clown nose that squirts water.  We all had fun with that...especially Uncle Loren!


The circus lasted almost two hours! We returned home elated and exhausted.  But that would not be the end of the excitement.  After the children's dinner, they were sent on a Treasure hunt that was planned to last through the adults' margarita time!  There were twelve clues in all and sent the kids all around the house in search of their treasure.  The clues were not easy, and all three of them persevered and triumphed in the end.  It was a very full day, but how many people can claim they went to a zoo and circus in the same day, much less in Cuernavaca, Mexico.
Posted by nanwebware at 7:49 AM